Anjali Prabhu is Professor and Edward W. Said Chair in Comparative Literature at UCLA. The author of Hybridity: Revisions Transformations, Prospects (2007) and Contemporary Cinema of Africa and the Diaspora (2014), her work has appeared in journals such as Diacritics, French Forum, Levinas Studies, Œuvres et critiques, Research in African Literatures, Journal of French and Francophones Studies, Cinema Journal, Studies in Twentieth and Twenty-First Century Studies, Contemporary Literary Studies, and PMLA. She was the Director of the Newhouse Center for the Humanities at Wellesley College and currently serves on the Executive Council of the MLA. 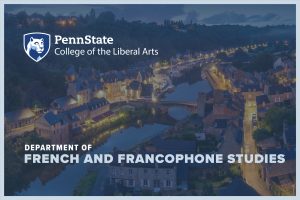 Please join us before Dr. Anjali Prabhu’s talk for a gathering with light refreshments.

Paget Henry is Professor of Sociology and Africana Studies at Brown University. He is the author of Caliban’s Reason: Introducing Afro-Caribbean Philosophy; Shouldering Antigua and Barbuda: The Life of V.C. Bird; The Art of Mali Olatunji: Painterly photography from Antigua and Barbuda. He is also the Editor of the CLR James Journal, a publication of the Caribbean Philosophical Association. 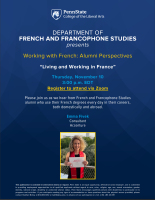 “Powers of Fiction: Scholastic Novels and Forgotten Women
in Third Republic France (1870 to 1914)”

This project explores a large corpus or about twenty French scholastic novels never before studied from a literary perspective. The Scholastic novel is a primarily woman-led literary genre that appeared in the second half of the nineteenth century that has now fallen into disuse. These publications were innovative hybrid texts that combined recreational appeal and pedagogical function, weaving together narrative and didactic occurrences. This genre reached peak popularity during the Third Republic and focused on both transmitting the knowledge and instilling values, aligned with the new national curriculum. Grounded in feminist theories, narratology, and literary analysis, Laurie argues that the lessons disseminated and by each book were in fact not all “aligned” and vary greatly depending on the author as they used fiction as a vehicle for political and ideological explorations.

Come learn about our French Language and Cultural Immersion program in Besançon this summer! 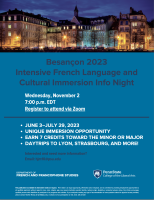 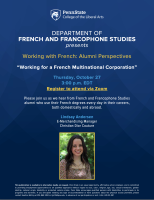 Tadjo vs Pokou: Transgressing the Myth

The Department of French and Francophone Studies presents Véronique Tadjo (author, artist, and Honorary Professor at University of the Witwatersrand in Johannesburg) on “Tadjo vs Pokou: Transgressing the Myth,” as part of Fabienne Kanor’s African Enlightenment seminar. 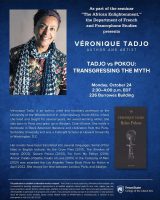 Table ronde: Dr. Abdellali Hajjat, "The Wretched of France: The 1983 March for Equality and Against Racism."

In 1983—as France struggled with race-based crimes, police brutality, and public unrest—youths from Vénissieux (working-class suburbs of Lyon) led the March for Equality and Against Racism, the first national demonstration of its type in France.

As Abdellali Hajjat reveals, the historic March for Equality and Against Racism symbolized for many the experience of the children of postcolonial immigrants. Inspired by the May ’68 protests, these young immigrants stood against racist crimes, for equality before the law and the police, and for basic rights such as the right to work and housing. Hajjat also considers the divisions that arose from the march and offers fresh insight into the paradoxes and intricacies of movements pushing toward sweeping social change.

Translated into English for the first time, The Wretched of France contemplates the protest’s lasting significance in France as well as its impact within the context of larger and comparable movements for civil rights, particularly in the US.

Thank to the Center for Humanities and Information and the Department of French and Francophone Studies for making this talk possible. 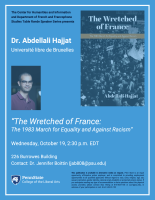